, /PRNewswire/ -- The latest information from (NASDAQ: SCOR), a trusted partner for planning, transacting, and evaluating media across platforms, shows that television viewing continues to rise as millions of Americans enter a new month remaining mostly indoors to comply with public health measures.

insights show that the much higher ratings for local stations during the pandemic are being driven by a much broader demographic representation of viewers than is typically observed during news segments. Several key age ranges are showing significant year-over-year viewing increases, with 18-34 up 38 percent, and 35-54 up 35 percent.

Among the other notable findings from latest preliminary data through : 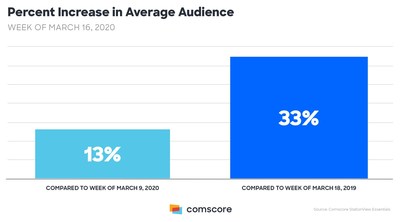 Looking first at households with adults ages 50+, these homes saw increases in viewership compared to both weeks — a 12 percent viewing increase from the week of to and a 29 percent increase over the previous year's week of . 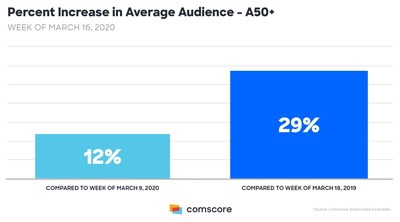 Surprisingly, households with adults ages 18-34 showed the largest increase in viewership from the same week in 2019. 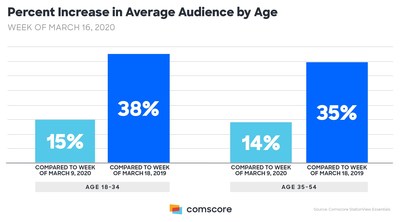 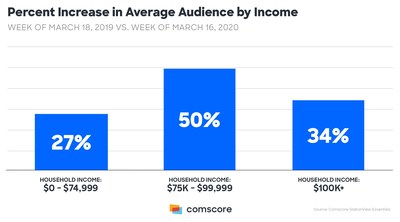 Local news viewership jumped significantly from the same week in 2019, especially among middle-earning households in the yearly income range, which saw a 50 percent increase in viewership.

Looking at overall increase in average audience rather than the percentage increase, found that local news viewing in the top 25 markets increased by well over a million households making between and each year compared to this time in 2019. The income group constitutes the smallest population of these three income breaks, only making up about 15 million households nationally, which is why it constitutes the largest percentage increase among the other income breaks, yet the smallest gross increase. However, these households were likely among those most impacted by stay-at-home mandates and the closure of non-essential businesses.

Looking at individual communities, and showed lower than average week-over-week increases than the national average when comparing the week of to the week of . This is understandable as these regions were hit early and hardest by the coronavirus. During the week of , viewing increases were most dramatic in , , and other Midwest metropolitan areas. 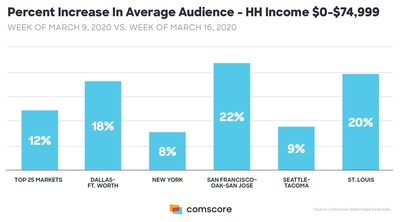 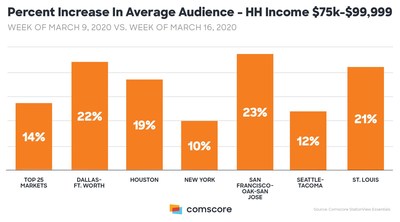 Changes in television viewership during the coronavirus pandemic can also be observed among Hispanic and Asian-American households. The increases were significantly higher when looking at the week of compared to the previous year. Viewing among Hispanic households is up 42 percent, while viewing in Asian households increased 62 percent. 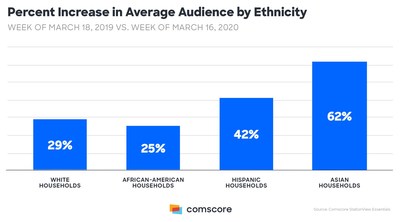 Compared to the same week in 2019, there are an average of around two million more households tuned in to local newscasts in the top 25 television markets. Nearly half a million of these new viewing homes are Hispanic households. 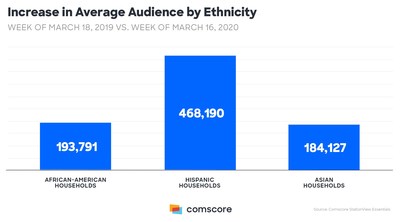 "American households are watching more and more local news across key demographic segments. Advertisers and their agencies can fine-tune their media planning and buying by continuing to work with to understand these ongoing shifts in local television viewing as engagement remains at unprecedented levels," said , CEO, .

About
(NASDAQ: SCOR) is a trusted partner for planning, transacting and evaluating media across platforms. With a data footprint that combines digital, linear TV, over-the-top and theatrical viewership intelligence with advanced audience insights, allows media buyers and sellers to quantify their multiscreen behavior and make business decisions with confidence. A proven leader in measuring digital and TV audiences and advertising at scale, is the industry's emerging, third-party source for reliable and comprehensive cross-platform measurement. To learn more about , visit www.comscore.com.